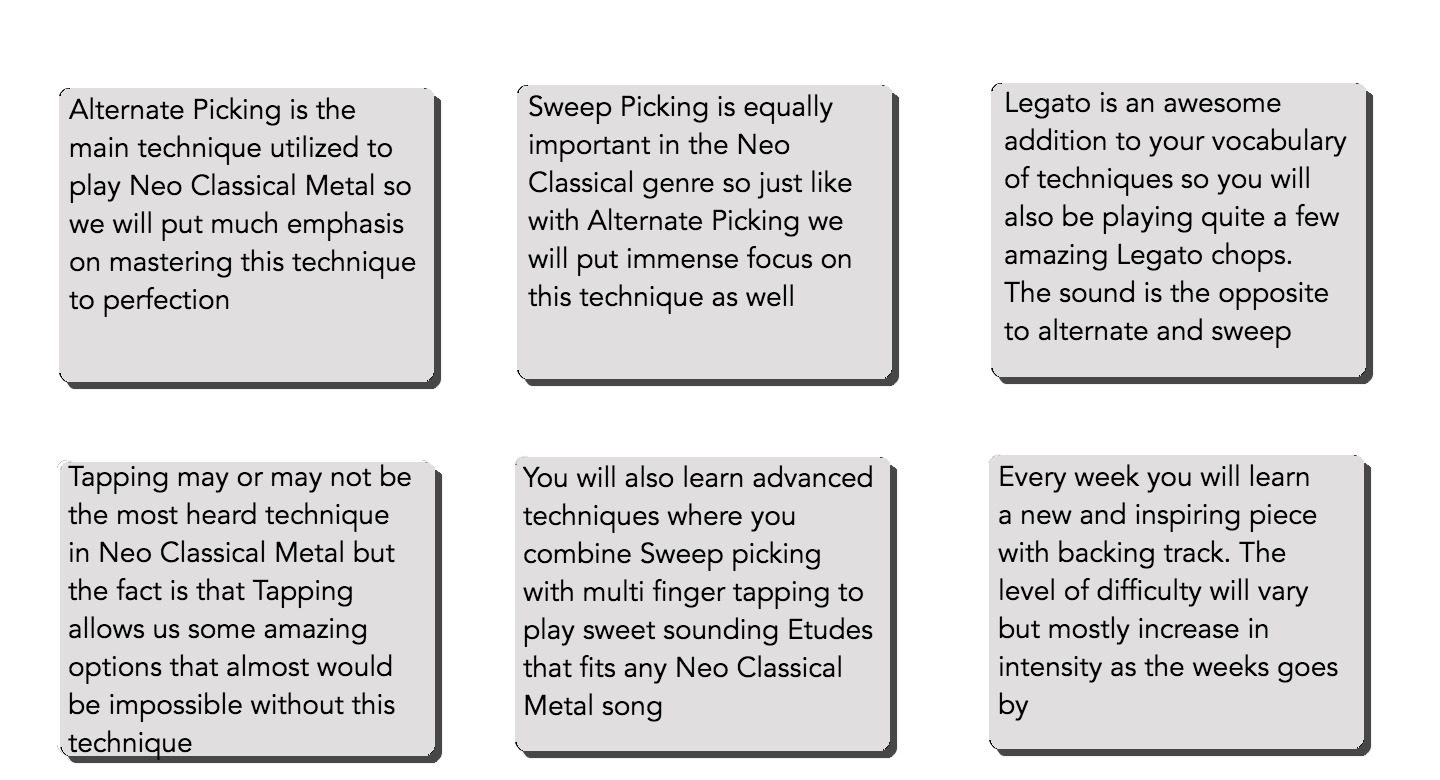 Dissecting and analysing Neo Classical Metal Masterpieces to fully understand the secrets. Using this knowledge and secrets to create your own Masterpieces

Final Graduation ! you will be creating a Neo Classical piece yourself and submitting it to get your final degree

Plus ! learn the style of these amazing bands and players

What this means to you is that you now will enter the league of real musicians and not "just" a guitar player that never get's further than noodling around with the guitar in he's room, not that there's anything wrong with that but now you'll at least have the option to step up with the big boys and free yourself of the technical, practical and theoretical obstacles that you might have been held back by in the past. Now It's your time to rock !

41 Hours of video plus bonuses

- about 120 minutes of video, tablature and backing tracks every week

- these Neo Classical pieces makes use of all the techniques that you need to master to become a Neo Classical Shredder, but the process of learning them are now much more fun and inspiring so you don't have to "force" yourself to practice

- You will now master the theory, strategies and tools to compose killer Neo Classical riffs yourself. Not just being able to solo but actually creating your own master pieces. You will get the basic understanding how and why both the Classical as well as the Neo Classical masters compose as they did and do

You will learn sequences that puts special emphasis on certain notes in a scale to create a unique sound. This means that something as common as the Natural minor scale can get and almost new sound just but putting extra focus on certain notes

You will learn awesome licks that are inspired from all the Neo Classical Metal masters like Vinnie Moore, Tony Macalpine and Chris Impellitteri. You will also learn advanced licks that combines several different techniques like Sweep picking and tapping

using pedal point in your solo's and in improvising in general is a great way to create the Neo Classical sound. We will study the concept in depth so you can make use of this idea in any situation when improvising

There's many opportunities in using intervals when creating a Neo Classical solo or piece of music, we will go through the intervals and decide which works the best to create the sound we want

The Harmonic minor scale is very often used as a tool to create Neo Classical sounding melodies, but there are several other options which we will get into like Phrygian minor and Natural minor

What is Neo Classical Metal?

If you are one of those who not only want to be able to technically play and master the techniques used in Neo Classical Metal we will also after analyzing some of the masters in the genre take their concepts and methods and re use them. This means that we will find examples of creating a Neo Classical sounding riff and chorus and this way make our own take on those examples and create a Neo Classical song from that. This is a really fun and inspiring way to become a composer yourself.

If you don't want to compose songs and play in a band or even play with other musicians that's totally cool as well. We will go through examples used in all the greatest Neo Classical players out there like Yngwie Malmsteen, Tony Macalpine, Vinnie Moore and many others. And you will be armed with the techniques so you can easily play the masters songs. You will also be able to quickly identify what a song is made up of which is an essential tool to sort of break down a song in parts which speeds up the learning process noticeably

Another critical element in becoming a great musician is to have a strong basis in rhythm. It's not something that is typical in a "shred" course but you simply cannot skip this component

How do you actually create a cool riff? in the course you will be given many examples that derives from original compositions from the Masters

You are no more limited to exclusively playing arpeggios the standard way up and down using Sweep Picking. You will learn new interesting ways to play arpeggios utilized with different techniques that opens up now possibilities that where not possible using Sweep picking or Alternate picking

On top of that we will also discuss the history and evolution of the Neo Classical genre. You will get the full understanding of this style and where all the elements in Neo Classical Metal comes from. The analysis of works by the masters of both Classical music and Neo Classical Metal will give you all the clues but in a fun and inspiring way

You will learn violin music and even piano music but played on the guitar. The cool thing about that is that different instrumentalists and musicians think and approach their instruments that you may not. This means that a flute or violinist would approach their instrument in a different way than a guitarist would coming up with awesome ideas that us guitar players would not think of. Of course all instruments has their advantages but we can improve much more if we learn from other instruments than if we exclusively learn from other guitar players

Find the composer in you

Experience the extreme joy of creating music yourself, this has to be experienced to understand it. Personally I have never experienced anything more fulfilling than creating a cool sounding riff or chorus for a new song. Personally I released three albums on the Lion Music record label and latest I released my new band Sage's Recital as well with many amazing and well known musicians

Understanding and mastering the chord progressions in Neo Classical Metal is essential in being able to produce and reproduce the sound. Once you understand the why and how you can make use of the trademark sound

Getting your degree in Neo Classical Metal

In the last week of the 12 week course you will submit either a self composed Neo Classical piece or a piece by one of your favorite Neo Classical Metal composers or even a classical piece for a review. This is of course not a must to do this but it's a very important stepping stone in become a musician yourself. If you prefer to skip this step of submitting a song for a review you can easily do that as well or even do it at a later point that feels convenient to you

Here you will get an assignment to create a song, you will get directions that when followed you will end up with your own Neo Classical Metal song. Here you can again as in the previous tests choose to submit a video or Tablature instead(Not obligated)

A major source for inspiration and opportunity to develop your own chops and ideas is to listen to a solo or a riff and then finding a way to play it on the guitar instead of finding the tabs to it on the internet. What this does that is so benefitial is that you not only come up with your own fingering and way to play it but it forces you to re create the sound but since you cannot see the tabs you develop you own way of doing so. You will get a head start by seeing how I do it in the course 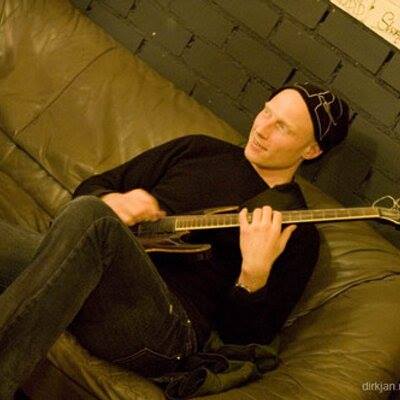 I did not expect what I saw, I'm very impressed with the content and how it's laid out - Jason F

When does the course start and finish?
The course starts now and never ends! It is a completely self-paced online course - you decide when you start and when you finish.
How long do I have access to the course?
How does lifetime access sound? After enrolling, you have unlimited access to this course for as long as you like - across any and all devices you own.
What if I am unhappy with the course?
We would never want you to be unhappy! If you are unsatisfied with your purchase, contact us in the first 30 days and we will give you a full refund.
off original price!

The coupon code you entered is expired or invalid, but the course is still available!